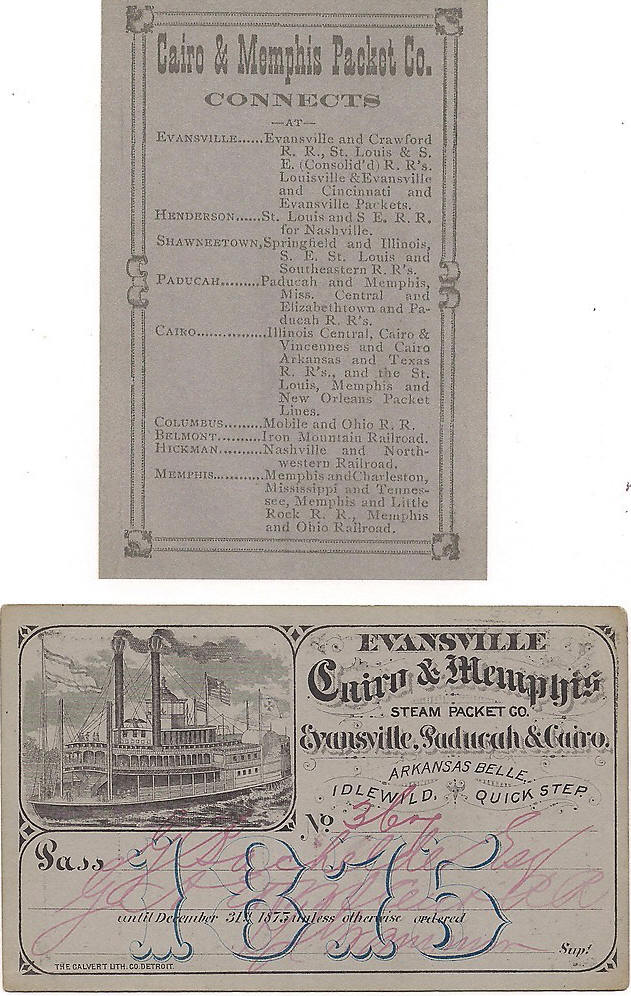 ARKANSAS BELLE Way’s Packet Directory:  built 1870 Cincinnatti Ohio 203.5 x 32.5 x 5.1, sternwheel packet.  Built for the Memphis and Arkansas River trade.  She had 2 bridal chambers opposite one another named “Tennessee” and “Arkansas” with beds a trifle high equiped with short ladders for the bride to climb up.  Built in the autumn of 1870, she got her first inspection Nov. 3 of that year, and was sold to the Evansville & Cairo Line, entering that trade Dec. 20, 1870.

IDLEWILD  Way’s Packet Directory:  built by Howard Shipyard Jeffersonville Ind. 1870 216 x 35.6 x 6.4, sternwheel packet wood hull.  “She was a beautful clipper of faultless proportions, proud and jaunty appearance, and as speedy as she was handsome.”  This boat paid for herself in just 2 years, and then was sold for just what she cost.  Her last owner was Memphis & Arkansas City Packet Co.  On Feb. 13, 1876 below Friar’s Point Mississippi she knocked out both cylinder heads in one engine when her starboard shaft broke.  A tornado whipped across, sinking the CITY OF QUINCY nearby.  The IDLEWILD , in her disabled condition, came alongside and removed the passengers.  The IDLEWILD and the OSCEOLA BELLE burned at Memphis on July 31, 1881.

QUICK STEP Way’s Packet Directory:  Sternwheel packet wood hull built Murraysville, West Virginia 1866 200 x 29 x 5.4.  Completed at Pittsburg.  Entered the Pittsburg – Cincinnatti trade fall 1866.  Sold first week of December 1866 and ran the Evansville – Paducah trade.  April 1869 the QUICK STEP collided with and sank OLLIE SULLIVAN at Diamond Island.  During a storm at Evansville July 7, 1873 she lost her stacks and was blown from the landing.  When dismantled at Metropolis Illinois, 1876 her machinery went to COAHOMA (Lee Line Steamer Co.).  Her oil headlights still was in the Lee Line wharfboat at Memphis 1920.  The QUICK STEP is named on the Lee Line Poster naming all boats the Lee Line owned during its existence from 1866 to 1926.

COAHOMA: Way’s Packet Directory page 102. Side Wheeler, Packet, wood hull, built Metropolis, Ill 1876, 205.2 x 32 x 7. Compound engines, 17’s, 31’s – 7 ft. Three boilers and five flues. Built for the Lee Line Memphis. A widely circulated report while she was under construction was that Capt. James Lee (Sr) intended renaming her KATE FRISBEE to honor that old packet and her builder. The Ohio River was very low when she was launched. The new hull plowed in the mud and stuck. The IDLEWILD took a pull at it but had no luck. Her wheel shafts came from the burned CITY OF EVANSVILLE and her cabin was from the QUICKSTEP. The job of moving the cabin took only an hour and thirty minutes and was done so easily that the night watchman asleep in the Texas did not know he was on a new boat until he was called. Paddlewheels were 26 ft. in diameter with 15 ft buckets. She ran Memphis – Friars Point where the Lee Line had a U.S. Mail contract at $18,400 annually. Capt. Harry Cooper was master in 1882 with John Haley clerk. In 1892 she was in Pittsburg having been bought by Capt. Lee Anshutz and theater owner Harry Davis. They had plans to make an excursion boat of her which died aborning. Dismantled. QUICKSTEP’S oil headlight was still in the Lee Line wharf boat at Memphis 1920