Posted on August 23, 2011 by leelinesteamers

A number of years ago, Shelby County TN Register of Deeds Tom Leatherwood had his staff digitize old records dating to the Civil War and before.   These records include the City Directories from 1859 through 1918, birth and death records, marriage licenses, along with a number of other old city and county records and which are available online.  The following is a list of Lee Family businesses as recorded in various City Directories:.

1889 Lee Brothers & Co.(advertised oils, mill supplies, ship chandlers, tent and awning mfgrs), managed by Bayliss Lee who ran the business until he took over the Bohlen-Huse Ice business when his father retired from active management.

1897 G. Peters Lee joins Lee Brothers as a clerk and in 1898 he becomes an assistant manager for the Lee Line U. S. Mail Steamers.  In 1901 he moves up to the position of assistant general manager.  He later becomes a boat captain.  In 1915 he becomes the proprietor of the Majestic Hotel and Pool room on Linden Ave, Memphis.   Around 1918 he is associated with the Majestic Excursion Line which ran out of Memphis.  Later he bid on several Lee Line boats when the family held a voluntary liquidation of the company in 1926.  The enterprise became the Valley Line which was comprised of the KATE ADAMS (III) and the Lee Line boats he purchased at the 1926 liquidation.  The Valley Line lasted only a few years before folding. 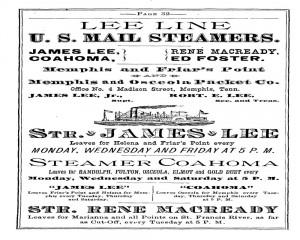