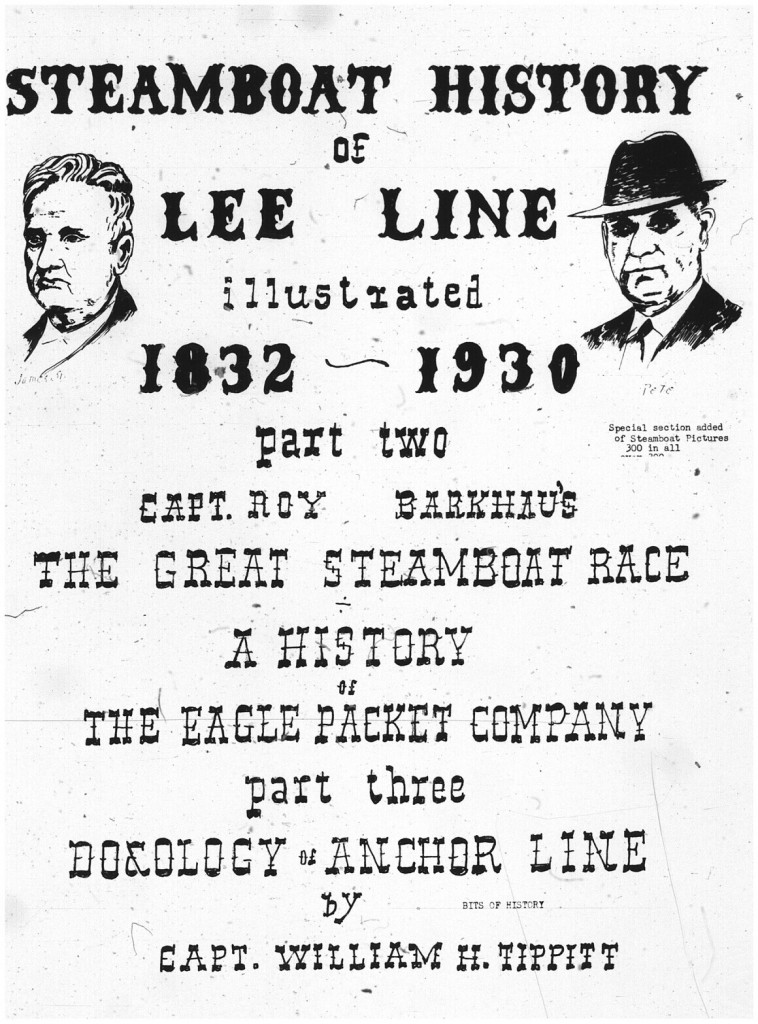 Captain James ‘Sunrise Jim’ was eldest of 12 children born to John and Sara Lee in Dickerson County, Tennessee on December 15, 1808; all of these children were given a college education.  The family was engaged in farming of large scale and operated several small furnaces in middle Tennessee.  Soon after the birth of James Lee the family moved to Dover, Tennessee, on the Cumberland River.

At age 16 James assumed the responsibility for the cutting and delivery of wood to the furnaces (Dover being a center for iron smelting).   He would engage a passing steamer to tow his wood flats up river to where the timber was being cut, load the barges and float them down to Dover.  During the winter months he was sent off to school.

Accurate dates are hard to come by because of the great floods in Ohio and Tennessee Valleys 1912 – 1913; which destroyed the files of nearly all of the newspapers and records in the towns and villages along the Tennessee and Cumberland Rivers, what these floods failed to destroy the flood in Ohio of 1927 did.

Completing his education in Spring of 1821 on returning home he found the family in dire need of funds, iron ore from St. Louis  of better quality had captured the Pittsburg market, with a large supply of pig iron and manufactured bars on hand he persuaded the family to make trial shipment of New Orleans.  Accompanying this shipment to New Orleans on a steamboat he disposed of it at fair profit.  He returned up river to Natchez (Mississippi) on a steamboat and then took the Natchez Trace for his home.  En-route he engaged in contract for timber cutting in middle Mississippi, high water then the hot muggy summer soon brought him down with Malaria fever and forced him to return north.

There was daily line of boats operating from St. Louis to Pittsburg, their departure from Pittsburg was always assured a full load, but from western terminals little was offered but iron ore and pig iron from several furnaces in Missouri near St. Louis.  Consequently the rate was low and in fact the rate to Pittsburg from Smithland at the mouth of the Cumberland on iron ore products was same as from St. Louis.

Many small steamers were operating on the Cumberland, in fact major transportation was by water then and James Lee persuaded the family to invest in a new steamer then being built at Nashville, to look after family interest he went as clerk on this steamer whose name we do not know.

In 1831 he married Penniah Lucinda Gibson also of Tennessee and to them was born three sons: James Lee, Jr., Thomas Edgar Lee – who presumably died while a small child, and Samuel Stacker Lee.

In 1832 he purchased half interest in Paducah and Nashville packet on which he was chief clerk for a time and then in 1833 Captain and owner of 6/8 of this steamer.  He remained on the Cumberland from 1832 until 1838 devoting his time to his steamboat and family farming interest.  It was during this period that he built and owned three steamboats, all built at the mouth of the Cumberland Smithland.  This can-not be confirmed but was told to writer by Capt. Wm. ‘Bud” Smedley.

About this period his father disposed of his farming interest in Tennessee and moved the family to St. Louis.  James Lee remained on the Cumberland.  He was well known in the trade and had accumulated a considerable fortune with a growing ambition to enter the New Orleans trade; which during the season of navigation on the Cumberland was a veritable gold mine to owners of steamboats, full cargoes were assured both ways.

Securing financial backing in 1840 he contracted for James Wood No. 1 a boat of 132 tons, carried 300 tons, according to Merchants Steam Vessels of the United States known as ‘The Lytle List’ and published by The Steamship Historical Society of American in 1952. This boat was built at Cincinnati and entered the Nashville and New Orleans trade under his command.  In this trade at time were between 25 and 30 steamers, with the James Wood No. 1 he made enough money to make a down payment on the steamer Paragon which had been built at Jeffersonville (Indiana) in 1839 of 263 tons and carried better than 500 tons.

The Cumberland River from Nashville to Smithland where it enters the Ohio River could be classed as a mountain stream, subject to rapid fluctuations and at times a raging torrent  with many sharp and dangerous twists and turns to be navigated.  It was not uncommon for the river to rise a foot or two an hour and to drop more rapidly.  There were many shoal places in the river especially Harpeth where in low water from 8 to 14 inches  was the controlling depth over the rock bottom of the river.

When James Lee started steamboating and up until the middle years of the thirties, double deckers had hardly made their appearance, the cabin for passengers was either in hold or on main deck aft of the wheels with open bunks having a curtain in front; in time this was improved upon by addition of cabin on ‘boiler deck’.  In the course of time staterooms with bunks replaced the open berths in cabin.  It was not until the forties that the small cabin was built on hurricane deck and called the Texas for first berthing of the officers on the boat.

The construction was simple, being flat bottomed, gunneled sides, with blunt bow and rake on stern.  They did not have fine lines of the steamers running on Ohio and Mississippi River at the time, which were very much designed after the clipper ships.  Their engines were of simplest design being either slide valve or lever engines , their length averaged between 138 and 175 feet in length with 24 or 30 foot beam and depth of hull from 4 to 6 feet.  They carried between 200 to 450 tons of freight depending on stage of river and as many passengers as they could crowd on board, there were no laws governing the number of people that could be carried on board.

The shipyard a Nashville and Smithland specialized in the construction of this type of steamer and it was at these yards James Lee had built during the 30’s three steamers and earned a reputation as an excellent steamboat man.