Posted on January 2, 2012 by leelinesteamers 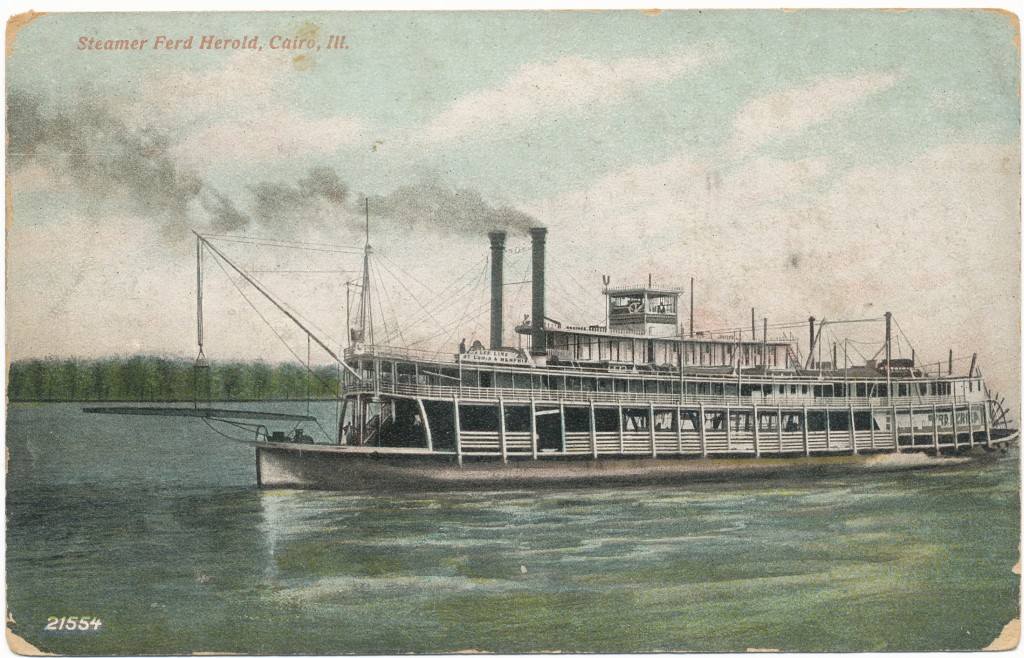 FERD HAROLD: Boat 2039 Way’s Packet Directory page 165. Stern Wheeler, Packet, steel hull, built at Dubuque Iowa 1890, 244 x 34 x 7.2. Engines 18’s – 8 ft. Three boilers. Ferd Harold Esq. was a St. Louis brewer who financed construction. His likeness in the form of a magnified bust was placed on the forward end of the Texas and later removed to the cabin. Her maiden trip was St. Louis – New Orleans, Capt. Henry W. Brolaski. Then Capt. Milt Harry went on her and she loaded out at St. Louis for Vicksburg. He placed her in the Ouachita River trade in opposition to the regular line and quit when he was paid off. She then ran St. Louis – Alton, did no go and was sold to the Lee Line for $30,000 having cost $75,000 new. They ran her St. Louis – Memphis. During the last several years of operation her owner was St. Louis Memphis Transportation Co., which also ran the GEORGIA LEE in the trade. S.C. Edgar was president of the line, G.F. Lee vice-president and J.M. Tucker general agent at St. Louis. Their folder also advertised the steel hull excursion steamer MAJESTIC. She ran this trade until 1919 at which time the Halliday wharf boat at St. Louis was sold and the Lee Line wharf boat at Cairo was discontinued. The FERD HAROLD was dismantled. Sugar Products Co. of New Orleans used the hull as a barge which foundered in the Gulf of Mexico late 1920.