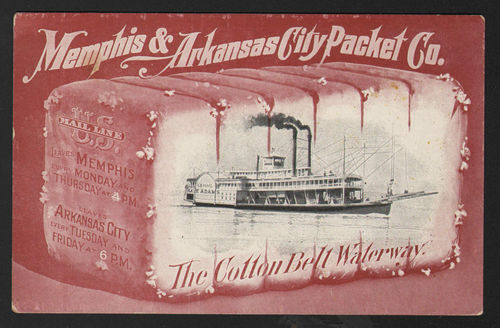 This rare Memphis Arkansas City Packet Company depicts the KATE ADAMS.   The three editions of the KATE competed against the Lee Line for many years.  The last KATE became part of the Delta Line and in January 1924, the Delta Line and the Lee Line consolidated becoming the Valley Line (Way’s Packet Directory 1948-1932).   My great uncle G Peters Lee and my grandfather S Rees Lee were involved in this venture.  The KATE was run and managed by the Rees Family of Pittsburg.  The Rees family also ran a company in Pittsburg that manufactured boilers and engines for steamboats.  The Rees and Lee families were friendly competitors of sorts.  I have correspondence from the Rees’ outlining business disputes arising from each side encroaching on the others preceived territory of operations.  I will add these letters in the future as well as additional KATE history from Way’s Directory.