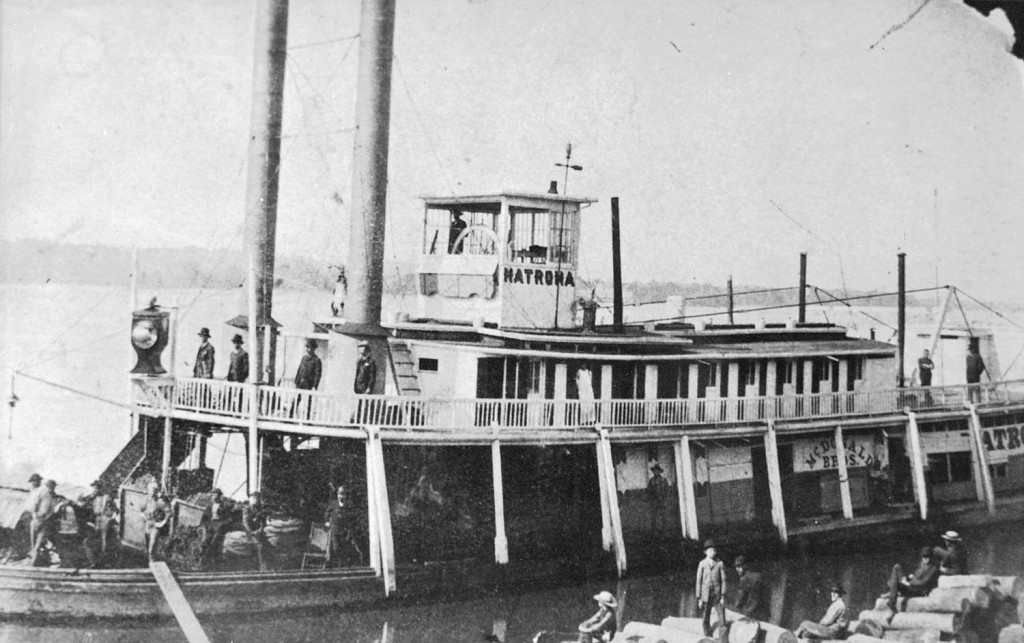 The Univ of Wisconsin has the following caption for this picture of the Natrona.  “Running as a towboat for the Pennsylvania Salt Manufacturing Company, Natrona operated on the Allegheny River. The towboat frequently made trips to the oil regions of the Allegheny and in March, 1864 she was grounded crossways in ice at Charley’s Oven, below Franklin, Pennsylvania. It was thought that she would break up, but was saved. In early 1867, the Allegheny Valley Railroad Company bought her. They used her in connection with the building of their line. One half of the ownership had been transferred to Captain James Lee(Sr.) in April, 1868. On May 31, 1868, she arrived in Memphis with 50 Pennsylvanians aboard. They were bound up the Current River (Arkansas), a tributary of the Black River, to colonize. They brought with them a portable sawmill to get out lumber for the New Orleans markets. Captain Lee ran her Memphis-St. Francis River in the packet trade. His first boat (PRINCE OF WALES) had been a victim of the Civil War and the NATRONA was the start of the Memphis-based Lee Line. By 1872 she was operating as a rafter on the upper Mississippi River. Variation in dates indicate that the McDonald Brothers Boat Company from La Crosse, Wisconsin owned and operated her from 1870-1890. They then sold her to Vol A. Bigelow also of La Crosse. A different source indicates that Captain Bigelow owned her by 1883. There are also two scenarios as to her demise. One indicates she “finally” sank near East Dubuque, Iowa in 1891 and the U.S. snagboats removed the wreck the following year. Another source states that she sank at the Dubuque, Iowa bridge in 1890 while owned by the McDonald Brothers. She was then sold to Captain Vol Bigelow and rebuilt in the winter of 1890. She was again wrecked in the fall of 1891 at Dunlieth, Illinois. The U.S. Government blew her up in April 1892.”

1863 was the year the NATRONA was built not when this picture was taken.

Used with permission from the Univ of Wisconsin collection